You are not connected. Please login or register
4 posters

Alright guys, ive been on a mission for a few months now, havent needed these yet, but now i do,so the hunt has been on. Ofcourse it hasnt been successful since I havent located a set of NOS ones or even been able to get a part number since no part numbers are stamped or molded into these channel run seals.

Anyway, I purchased the channel runs for the 80-87 model 2 doors, and received them 2 days ago, I purchased them from Fairchild Industries Weatherstripping, super quality. However i knew there had to be a difference in the 80 and ups but i was so curious I had to purchase them. Well..... They do and dont fit, this picture below will do most of the speaking for itself but it is worth noting that in 1980, is when they switched over from using a typical window regulator to a belt/tape driven type mechanism, and when they did that, they had to end up putting a piece of metal in between the channel run so a plastic clip attached to the glass would keep the window straight as it went up and down. Now the 79's and down dont have this and rely upon the regulator to keep it straight, the window channel run just keeps it from hitting metal and squeaking and what not as it goes up and down. 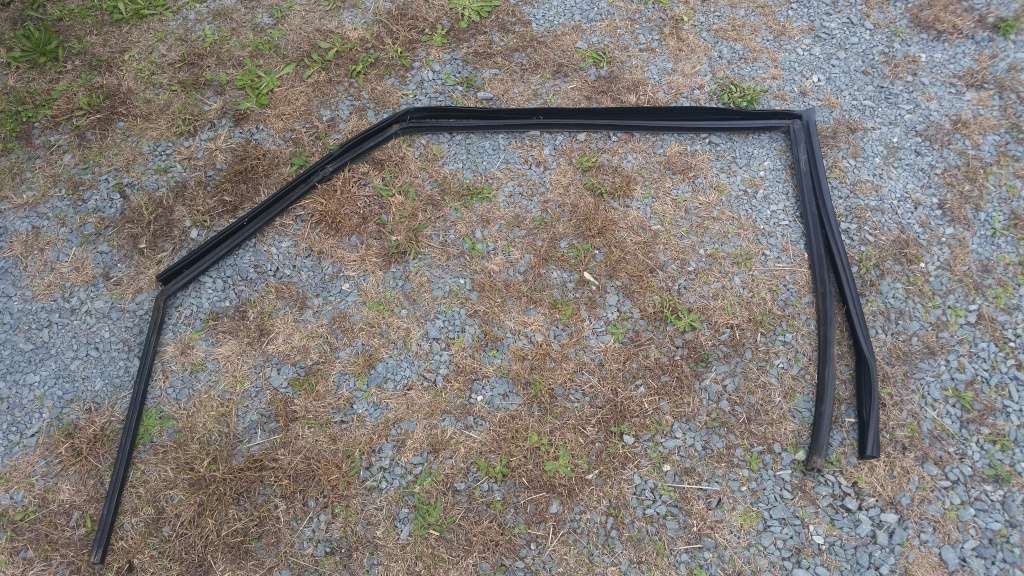 Obviously the main difference is the length, the other main difference is on the vertical side right after the 90 degree turn there is no felt, thats where the metal plate would go, so if you were to install them the glass would be pressed against the gripping rubber and wouldnt slide up very well, the same goes for the other end, its not long enough and again if you were to use it, the glass would be riding on the steel track and i dont think that will sound too pretty.

So Ive been talking to Fairchild Weatherstripping, and of course they gave the spiel of "we need a min of 1000 orders and about 3 to 5,000 dollars to put these into production" even though im sure they dont have that high of a demand for the 80-87 2 doors, but anyways. TBH they could just "modify" the 80-87 2 doors, all they would have to do is make it longer and put felt on the one end, thats the only problem ive discovered, fitment is exact, i installed them just to see.

So now the next step is using universal channel run which was suggested by one of their representatives. She sent me a list which i have posted as a link to their website below, and told me to pick out what looks correct along with measurements, and what ive got is number 1374 on the list is pretty much exactly what I and We would need if we were to do it.
http://afproducts.automotivefairchild.com/viewitems/standard-weatherstrip-trim-seal-products/glass-run-channels

That leads me to my next thing, I think im going to bite the bullet and go for it and try the universal. Id really love to have an exact fit ofr the 90 degree turn, but some cutting and gluing should solve that. I did contemplate modifying the 80-87 channel runs but talked myself out of that.

Thank you for checking into this. I too was contemplating buying the 80 and up, but it looks like that won't work after all. You know, the sad thing is, they used to be made aftermarket for the 77-79. I know, because I bought a set right out of the JC-whitney catalog about 12 years ago and they fit perfectly. They even came with the oblong shaped clip piece for the corner. The problem is, these companies have outsourced everything in the past 10 years and along the way, products were dropped. The simple explanation, no one knows how to make them anymore and there used to be 2 or 3 different companies making them. I guess universal will be the only way to go and something tells me I better hurry up and buy the trunk and door seals because who knows how long they will keep making those.
_________________
1979 Caprice Classic Carmine Metallic 2-door 350/TH350 -under slow frame off restoration!
1982 Pontiac Trans Am Black T-Top 327/TH350 -Knight Rider KITT replica
1989 Pontiac Firebird Black T-Top 305/700R4 -nice sunny day daily driver
1997 Chevrolet Silverado Ext. Cab 3rd Door White Vortec 350/4L60E
blacknred79

Am I mistaken, or are the ones on this site/page marked "2 door sedan" not the ones we are looking for?

My bad......I mistook the window channels for the door seals! LOL!
Sweet Seventy9

Has anybody tried Restoration Specialties?  http://stores.restorationspecialties.com/

It looks like they might be able to make them: "Because kits are made to order, kits can sometimes take longer to ship. If there is a delay with your order, we will contact you."

Don't forget to search for other B-body models too.  Delta 88, Caddy Deville, and a few others are the same.